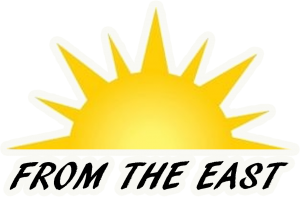 Brethren,
My term as Master is half over and I want to thank everyone for their support so far this year. We have accomplished many things and will continue to do so for the remainder of the year.
As the sun in the sky at meridian reaches its zenith for the year remember that we do not go “dark”. As Freemasons we never go dark. Although we may not see each other for several weeks, the light each of us emits will always reach the rest of the brotherhood. Think of the summer break as going on an extended refreshment. We are still a lodge and we continue to do the work we perform outside of the lodge room including charity, fun, and brotherhood.
Please continue to support our ongoing food drive for those who are less fortunate than we are. You may contact me or WB Jeffrey Rawley if you have donations to make. We will also have several social events over the summer break included in the Trestleboard & Dates for Your Calendar sections of this trestleboard. I hope to see you all there.
Freemasonry is an attempt to organize harmony, and therefore it is essential that all its arrangements for the promotion of concord should be of the most perfect character and most delicately adjusted. Whatever tends in the least degree to produce disagreement and discord, to cause a jarring and clashing among the elements composing the society, or any of its branches, must have a tendency to defeat the purposes of the institution, must in itself be destructive of the spirit of Masonry, and must be something foreign to that spirit, something not to be cultivated, but to be avoided by Masons
– The Masonic Monthly, February 1867.
Fraternally and Sincerely,
Doug Harper,WM 2017 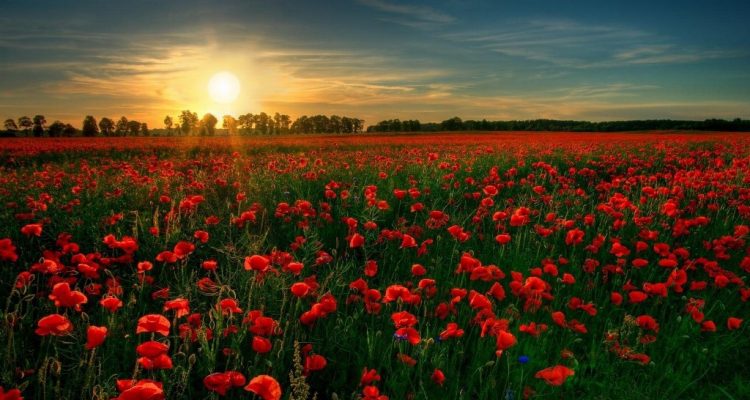 In Flanders fields the poppies blow
Between the crosses, row on row,
That mark our place; and in the sky
The larks, still bravely singing, fly
Scarce heard amid the guns below.

We are the Dead. Short days ago
We lived, felt dawn, saw sunset glow,
Loved and were loved, and now we lie
In Flanders fields.

Take up our quarrel with the foe:
To you from failing hands we throw
The torch; be yours to hold it high.
If ye break faith with us who die
We shall not sleep, though poppies grow
In Flanders fields.

Cheers on a wonderful degree night, and a big congratulations to Bro. Anthony Jacobs, Bro. Tom Kostka, Bro. Jared Pollen, and Jonathan Szalay on being raised to Master Mason. 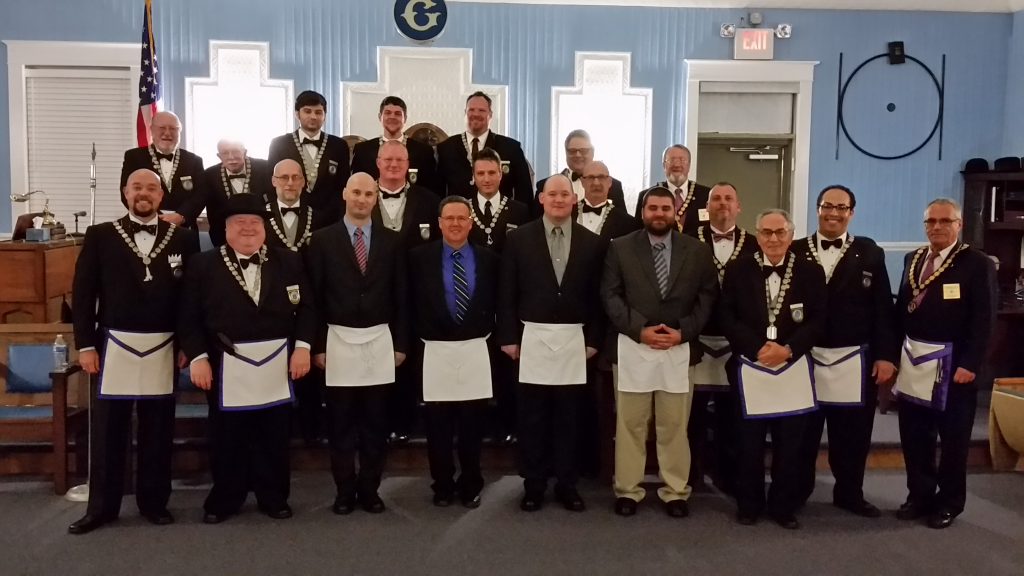 In the most special of months I remind you of to honor those who sacrificed everything that we may live in a free country. This coming Memorial Day is more than a day to cook out and enjoy the nice weather. Without the sacrifice of our fallen brothers and sisters we would not have the freedom nor treasure that we enjoy so much. I also remind you to remember she who gave you life on Mother’s Day. I borrow from the Order of DeMolay Flower talk:

You may have risen to positions of great influence in commercial, political, or professional life, but you can never reach the heights of your mother’s secret hopes for you. You may sink into the lowest depths of infamy or degradation but never below
the reach of her love. The memory of it will always stir your heart. There is no man so entirely base, so completely vile, so utterly low that he does not hold in his heart a shrine sacred and apart for the memory of his mother’s love.

Whether she is with you or if she has passed on memories of her love will always be with you and will always be a guiding light for you. On that special day dedicated to her please think of your mother and, if she is still with you, call her, take her to (or make her) dinner. Send flowers. Whatever you do she will be thrilled that you thought of her on her special day. If she has
passed on, please remember her on this day. She will know.

“Few delights can equal the mere presence of one we can trust utterly.”
– Brother George MacDonald 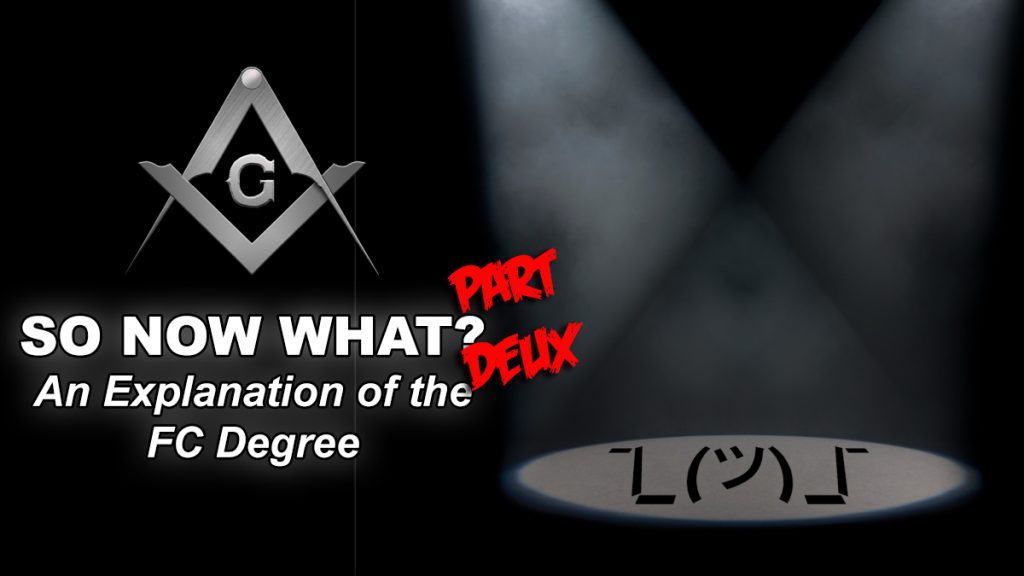 You’ve passed to Fellowcraft. So now what? What was this degree about? What should your takeaway be?

Join us this Monday evening for our regular meeting. Our officers will be sitting in Advanced Chairs and we will also have an enlightening presentation on the Fellowcraft Degree. We hope to see you all there.

THIS IS ONLY OPEN TO BROTHER MASONS (FC and above)

Dinner will be served at 6:30 before our regular meeting. 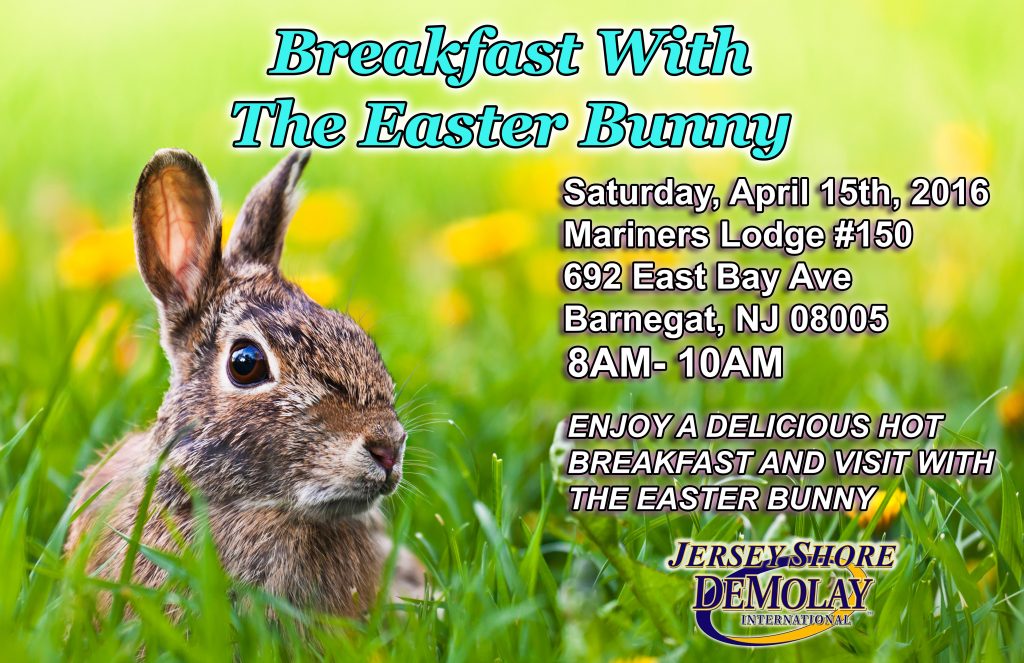 It’s time to spring into Easter! Bounce on over to Mariners Lodge for Breakfast With The Easter Bunny, hosted by Jersey Shore DeMolay. Enjoy a delicious, hot breakfast and visit with the one and only Easter Bunny.

Seven Score and twelve years ago the bloodiest war in American history, the American Civil War, ended. During the struggle that nearly tore our country apart, there were many occasions when Freemasons on both sides of the lines remembered their obligations toward each other and, despite their political differences, they risked life, limb and treasure to aid and relieve a brother in need. A remembrance of that time follows:

“My father had been a soldier in the Union Army.
He was made a Mason in a military Lodge. Taken
prisoner at Arkansas Post, he was carried up the
Mississippi River to Rock Island, Illinois. My father
became desperately ill, and made himself known
as a Mason to an officer of the camp. The officer
took him to his own home and nursed him back
to life. When the war ended, he loaned Father
money to pay his way back to his Texas home,
and gave him a pearl-handled pistol to protect
himself. This experience of my father, when
I learned about it, had a very great influence
upon my life; the fact that such a fraternity of
men could exist, mitigating the harshness of war,
and remain unbroken when states and churches
were torn in two, became a wonder; and it is not
strange that I tried for years to repay my debt to
it.”
– Joseph Fort Newton, D.D. in River of Years

Our Annual Saint Patrick’s Dinner was a rousing success. Our thanks to everyone who came out, helped out, and spend the night with us.

If you’d like to see some of the great pictures from the night, click on the image below. 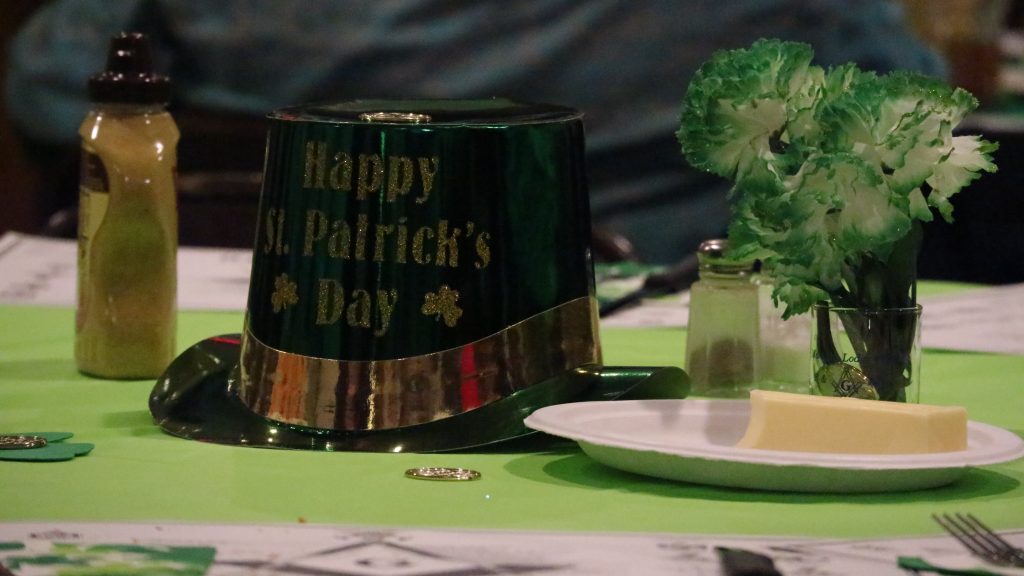 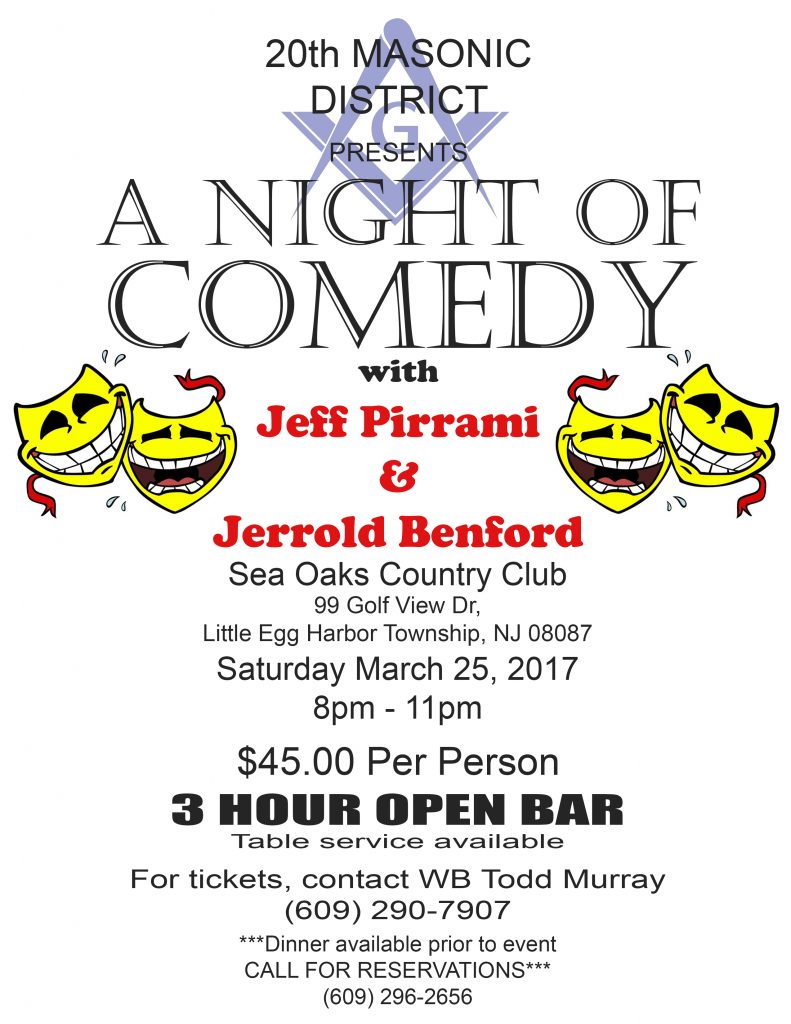 The brothers of the 20th Masonic District invite you to an evening of laughter and fun. A Night of Comedy will be held next Saturday, March 25th from 8-11pm at Sea Oaks Country Club. Tickets are only $45, and include entrance into the show and a 3 hour open bar. Dinner service is available at Sea Oaks prior to the event. Please contact them for a reservation.

Space is limited so hurry to contact WB Todd Murray to purchase your tickets. 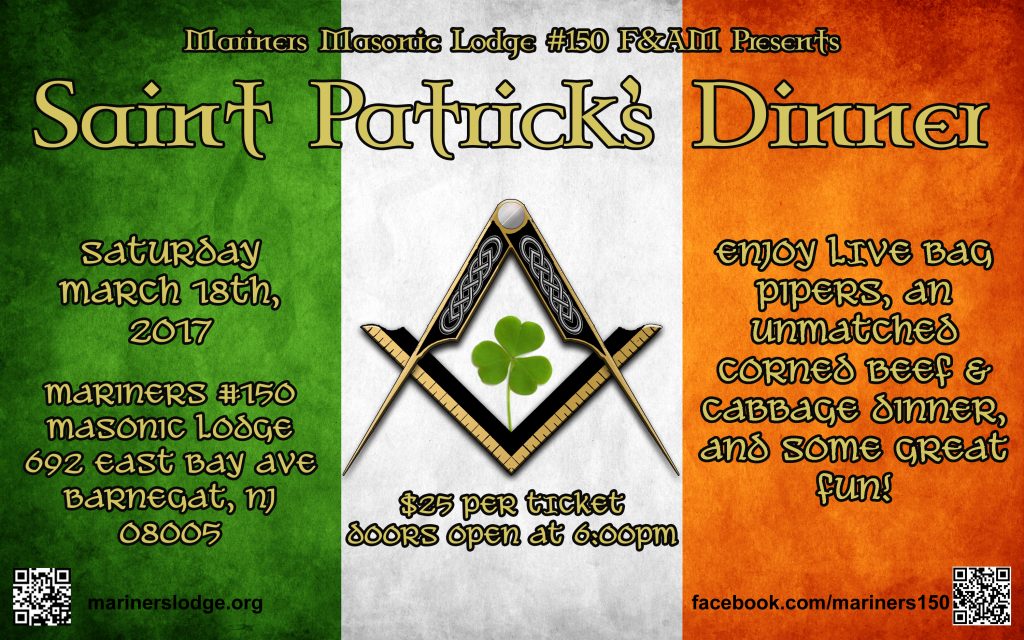 Irish eyes are smiling! That wonderous that time of year is upon us again!

On Saturday, March 18th, 2017 join the Brothers of Mariners Lodge as we celebrate all things Irish with our our annual Saint Patrick’s Day Dinner.

Enjoy LIVE Bag Pipers, our famous corned beef & cabbage dinner, beer, wine, and some great fun! Come out and be a part of the festivities.

TICKETS ARE LIMITED, SO SEE A BROTHER TO GET YOURS NOW!!!

All applications must be submitted by 18-April 2020.